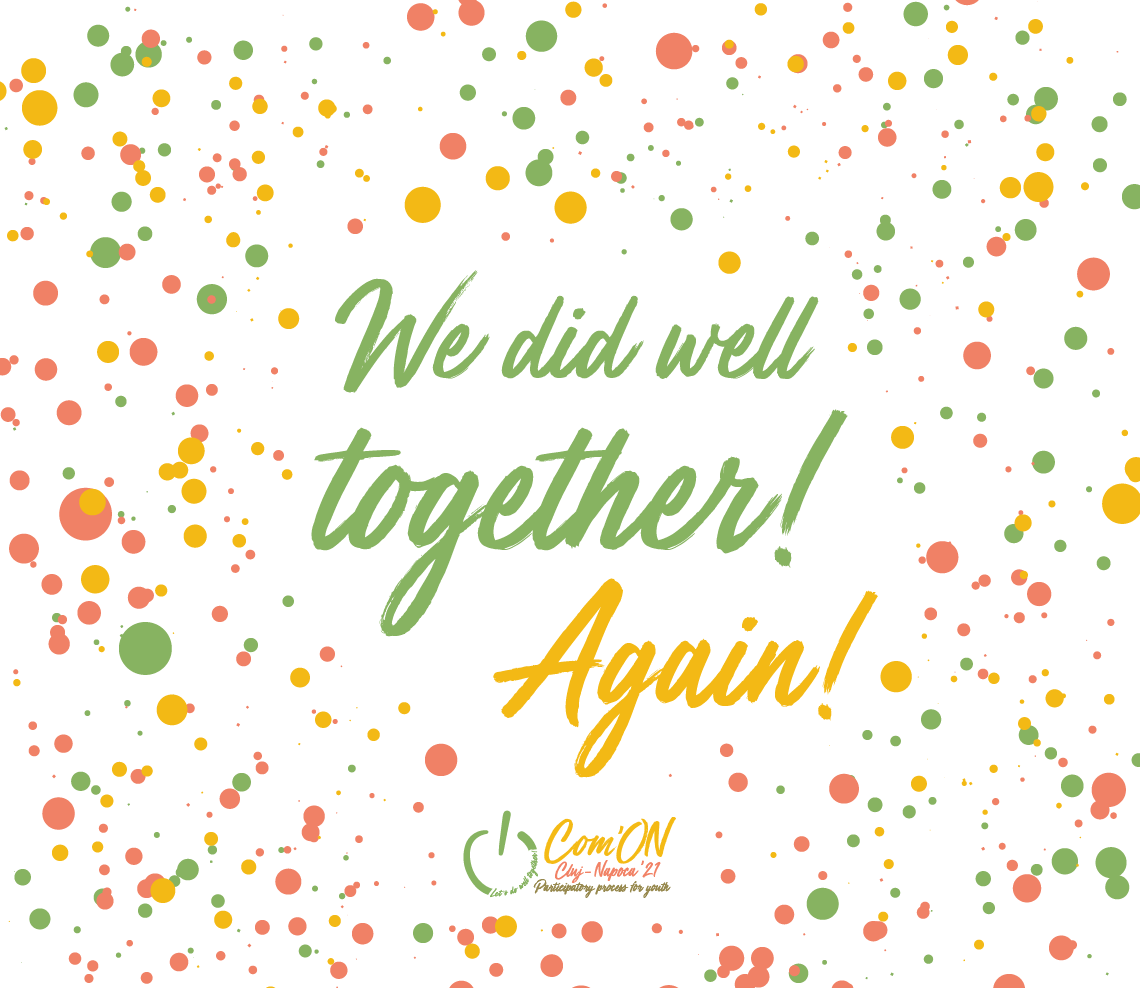 Pantomime and puppet theater, sign language, aerial dance workshops, good-thinking houses in Central Park, aerobics sessions at the Gheorgheni Sports Base, letters of encouragement written and read on Cetățuie, school theater, film screenings and health education workshops for children, blood donation campaigns, greening actions, online art therapy sessions. These are some of the 36 initiatives voted by the people of Cluj and put into practice between October 8 and November 21 by the young people of Cluj in the participatory process Com’ON Cluj-Napoca ‘21.

Com’ON Cluj-Napoca ‘21 also included actions in which the people of Cluj could learn a new sport, the roundnet, they listened to stories of the monuments of Cluj from a modern phonograph. Also in the participatory process for youth, there were online conferences for young people, online career counseling sessions, emotional education for teachers, workshops on well-being, ie well-being and peace, or even first aid sessions and measuring stress.

In the current context, the events took place both in different places in the city such as Cetățuia, Cinema Arta, Central Park, Gheorgheni Sports Base, Unirii Square, but also online.

All the initiatives implemented within Com'ON Cluj-Napoca '21 aimed at a better and healthier life in the community, both physically and psychologically and pursued a state of well-being and fulfillment together. - as the motto of the edition says, Let's do well together! (Let's do well / be good together!).

"Take 120 young people, 45 of their cool ideas, a cool, cool, cool team to support them and here comes Com’On Cluj-Napoca ’21. But you've probably seen them lately, that they've flooded the city with initiatives. In the last two months we have had houses with good thoughts or puppet theater, the first steps in the psychologist's office, greening in Hoia, blood donation and many other very strong initiatives for the community, so for all of us. We did well together. Again ”- said Larisa Dumitroaea, project manager of Com’ON Cluj-Napoca ‘21.

36 initiatives proposed by 23 groups of 90 young people were financially supported with a maximum of 3,500 lei / initiative by the City Hall and the Local Council of Cluj-Napoca and BCR and were put into practice between October 8 and November 21, 2021, both in the city and online. The proposed ideas were in one or more topics proposed by the organizers: 22 in the category of health, 28 in learning, 9 were in terms of participation and 16 in terms of environmental activation.

Between August 4 and September 10, 40 initiatives were registered at Com’ON Cluj-Napoca ‘21 of 93 young people aged between 14 and 35 years. The average age of those who entered their ideas at Com’ON Cluj-Napoca ‘21 is 23 years. After the ideas were technically verified, they were promoted in the Cluj community, and those interested entered www.comoncluj.ro where they chose their favorites, between September 21 and October 5. More than 2,000 votes were registered from more than 1,000 citizens of Cluj.

A special element of this year’s edition of Com’ON Cluj-Napoca was Com’ON Teens, intended for young people aged 14-17. They were invited to submit their ideas, and then participated in an online hackathon in which they developed their idea, helped by facilitators. Their ideas were published on comoncluj.ro and were voted online by the people of Cluj on November 17-23. All the 9 initiatives proposed by the young people obtained a minimum of 50 votes, so all of them were awarded by the municipality of Cluj and by BCR with 2,000 lei each. Among the ideas of young people are treasure hunt activities, creating a place to explore art and creativity, discussions about sex education, food education, a community space for learning, recreation or career counseling.
-
More information about the process can be found on the Com’ON Cluj-Napoca website, www.comoncluj.ro and on the Facebook (facebook.com/comoncluj/) and Instagram (instagram.com/comoncluj/) pages.

Com’ON Cluj-Napoca ‘21 is run by the PONT Group, an organization founded in 2009 that aims at social innovation through participation, entrepreneurship and culture, with a special focus on youth and digitalization. The foundations of this participatory process were laid in the context of the Cluj-Napoca 2015 European Youth Capital program.

The Com’ON Cluj-Napoca ‘21 project is realized with the support of the Cluj-Napoca City Hall and Local Council and of the Romanian Commercial Bank.

Write us on Messenger